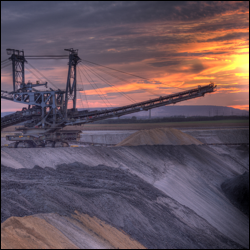 The CleanFinancial.com guide to the mining sector.

Where Can I Trade the Mining Sector?

You can currently spread bet on the mining sector with: You may be able to trade this sector with other brokers.

For more details on a particular miner, click on the relevant link above.

In most cases we have added the latest broker ratings, live charts and prices as well as details on how to trade the individual company.

Also see our guide to trading and spread betting on Sectors.

Below, we have a number of articles which speculate on the mining sector.

Most of the market conditions will have changed since the analysis was written and the fundamental arguments may no longer apply.

Nevertheless, we feel the analysis is still useful if you are new to trading this sector because it talks through many of the factors that positively and negatively impact the mining companies.


Fundamental Outlook for the Mining Sector

Below, a video report from IG about the latest movements among mining stocks, 8-Oct-2014.

With commodity prices starting to struggle, IG talk to John Mayer, Mining Analyst at SP Angel, about the current trading environment in the natural resources sector.

Mr Mayer suggests that large miners Rio Tinto and BHP Billiton are looking to take market share from the smaller iron ore producers, the spread of Ebola remains a ‘meaningful threat’ and China is ‘quite comfortable’ with Glencore.


Mining Sector to See a Correction?

Below, an article by Michael Hewson, Market Analyst, CMC Markets on the mining sector, 7-Jan-2011.

The commodity price crash of 2008 saw metals prices and mining companies plummet in value across the board as investors sought to deleverage across the globe in the face of the credit crunch.

Since then stocks and in particular commodity prices have rallied on the back of government efforts to stimulate their economies back to a sustainable growth path.

As one of the most cyclical sectors, the mining sector has borne the brunt of this rotation of capital and in some cases mining shares have recovered all of the losses incurred in the financial meltdown in 2008.

Optimism about growth forecasts in emerging markets in 2011, especially in China and India is fuelling demand for copper which has surpassed the levels we saw in 2008 at $4 to hit record highs above $4.40.

Despite concerns about rising inflation tempering risk appetite in 2011 the expectation is that these economies will continue to grow at slightly slower rates once measures have been taken to temper the inflationary effects of rising commodity prices.

Rising inflation in these BRIC economies has fuelled speculation of monetary tightening in the early part of 2011, and this could curtail risk appetite going forward in the event of a slowdown in the growth rates in these economies, however while GDP growth continues to pull ahead of western economies, mining companies should continue to hold up well if commodity prices continue their upward trajectory, however with the price beginning to deviate away from the 200 day MA there is potential in the short term for a pause in upward price momentum and a slide back in commodity prices.

As a result the UK mining sector has continued to make gains and could well re-test the highs we saw in 2008 at 30,745.

The sector could pull back towards the 200 day MA and trend line support around 22,000 without negating the current positive momentum that has been in place since the lows in late 2008.

Some stocks within the mining sector have outperformed the sector since the 2008 lows while some have underperformed.

For example Australian miner BHP Billiton, the world’s largest mining company has managed to regain all of its losses from the 2008 decline, despite notable failures in its acquisitions program over the past 12 months, to post brand new highs despite concerns about an Australian resource tax impacting profits margins.

Having succeeded in holding above its 2008 highs after initially failing earlier this year, momentum remains positive.

A fall below the 2,200p level could prompt a fall lower but only a move below the uptrend line at 1,925p, from the 2008 lows at 731.50p would undermine upward momentum and prompt a larger sell-off.

Chilean copper miner Antofagasta has been the pick of the bunch though outperforming all the others blasting past its 2008 highs at 886p to trade nearly 90% above these levels, on the back of the surging copper price.

There is a danger that the move higher could be overextending itself as the price moves further away from its 200 day MA, however while copper continues to rise the share price could well find downside pressure limited. There is support around the 1,360p level from the lows this year around 760p, while the 200 day MA should also act as support on any pullbacks.

In direct contrast copper and zinc miner Xstrata has underperformed the sector by quite some way despite the expansive rise in metals prices as it looks to test the 61.8% retracement of its down move from the 2008 highs to the 2008 lows.

Certainly as long as the uptrend line that has been in place since the March 2009 lows at 1,032p and the 200 day MA support remains intact, a test of these levels seems likely.

However any slide back in copper prices could quickly undermine this and see mining sector shares slide back quite sharply.

There is certainly plenty of scope for share prices to slide back given that a good number of them are quite some distance from their 200 day MA’s and share prices do have a habit of reverting back to their 200 day means over time.